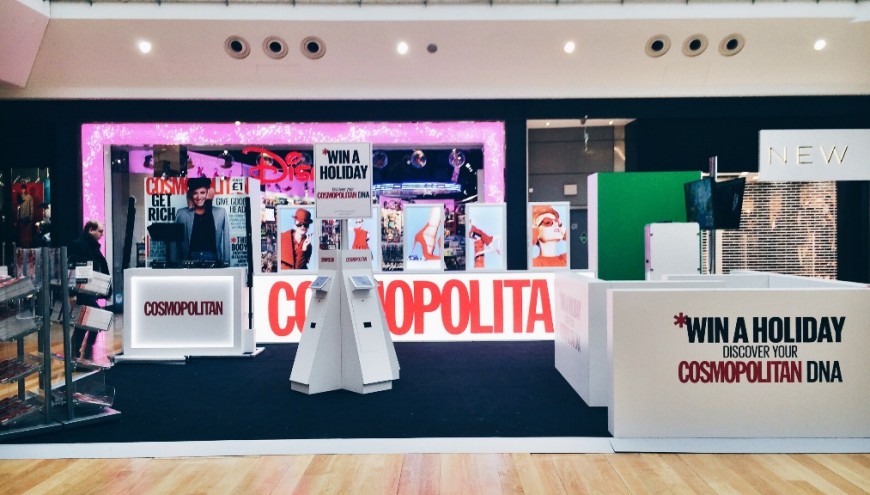 From Friday 16th through to Sunday 18th, King of the Booth worked alongside with Cosmopolitan in Birmingham’s busy shopping centre, the Bull Ring. Cosmo were there to promote their latest November issue. This was our second stop with Cosmo for consumers to have a chance to win a holiday. We’re hitting locations up and down England such as Birmingham, Stratford-London and Newcastle. A way in which Cosmo wanted everyday shoppers to get stuck in and involved was a chance to win a holiday, in association with NEW LOOK, around the world, over 50 countries to choose from. A destination suited to your ‘DNA’. They’d set up a quiz, asking a bunch of questions to ultimately see what type of a traveller you were.

Once they’d finish the quiz, it would show them which destination would be best suited for them. Then with their ticket, shoppers made their way to the green screen backdrop and positioned themselves in front of our smallest, portable compact booth.

Users were able to select the destination they were given or any at their preference as a background, monuments such as Big Ben, The Eiffel Tower, Great Wall of China. Once they’d taken their picture and received their own copy, they also had the option to upload the image digitally via social media such as Facebook or Twitter. The images were also being shown on screens in the shopping centre so shoppers passing by were able to see what was going on.